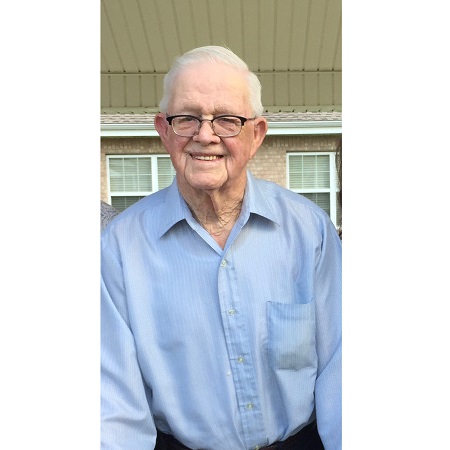 Cecil Jack Butler, 95, of Wolfe City passed away May 15, 2021 at the Wesley House in Sulphur Springs, Texas.   He was born May 27, 1925 in Gober, TX to William John Butler and Savanah Idella Wagoner Butler.  He married Mable Ardina Smithey on April 5, 1946 in Greenville, TX. They were married 71 years.  He was a member of West Main Church of Christ in Wolfe City and recently, League Street Church of Christ in Sulphur Springs.

He farmed for 15 years then began carpenter work for 30 years.  He built and remodeled many homes in the surrounding area.  He also had numerous other vocations of restaurant and antique store owner, landlord, and rancher.  He worked with his church and community and was honored as Wolfe City Chamber Member of the Year.  He was a member of the American Legion for 74 years.

He was a WWII veteran where he was awarded two purple hearts, the Bronze Star and numerous other medals.  He landed on Normandy Beach 3 days after D-Day.  For 18 months he and his company fought their way across France to the Huertgen Forest battle; where in his company alone, 480 men were cut off for 3 days and nights.  He was one of the 16 that survived.  Out of those 16 all had frozen feet except one. From there he proceeded to the Rhine River and the war   ended soon after.  He made 3 trips to England for injuries; the third stemming from frozen feet.  He also suffered many wounds from gun shots and shrapnel.

We request that attendees practice appropriate protocol for health issues.   The family wishes to express their gratitude and heart felt thanks to nurses and providers at Heart to Heart Hospice, Wesley House and Hopkins Place for their kindness and loving care.  Also, a special thanks to Morresa Bain for the special care and loving services she provided.