The Interment is a private ceremony. 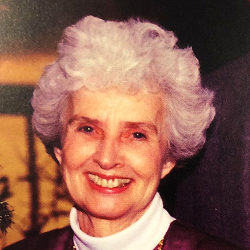 Helen Clayton went home to be with the Lord on August 12, 2019, two weeks shy of her 95th birthday.  She was in her home and surrounded by her family.

Helen Ruth Kehoe was born in Texline, Texas, on August 24, 1924, to Fred and Abbie Kehoe.  She attended Texas Women’s University and taught school before marrying the love of her life, Bernard Clayton, on Christmas Eve in 1943.  She raised six children and was an expert homemaker, cook, and seamstress extraordinaire. She was the first woman president of the Wolfe City School Board and was a founding member of the Wolfe City Public Library.  She was very involved at the First United Methodist Church in Wolfe City, Texas, and was an active member of UMW. She loved dancing and is well-known for her homemade baked goods, nursing home visits with her children and her loving attention to each grandchild. She truly had a servant’s heart and leaves an enduring example of Christlike love and hospitality.

Helen was preceded in death by her son Brady, her husband Bernard, and her brothers Crockett and Freddie Kehoe.   She is survived by her brother Billy Kehoe and wife Virginia, daughter-in-law Jan Gardner Clayton, and her children: Steve Clayton; Terry Clayton King and husband Jim, Jan Clayton Anderson and husband Bobby; Chris Clayton and wife Anne; Sally Clayton Martens and husband Vern.  In addition, she leaves a rich heritage of 14 grandchildren and 15 great-grandchildren.

Pallbearers will be: Ian, Andrew and Asa Anderson, Brady, Brooks and John Clayton, and William Martens.

There will be a private family graveside service on the morning of August 14, 2019, followed by a memorial service at 1:30 p.m. at the First United Methodist Church of Wolfe City, Texas.

In lieu of flowers, memorials may be made to Texas Scottish Rite Hospital for Children or the Wolfe City United Methodist Church.