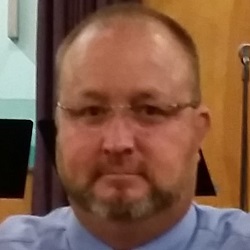 Ronald Wade Malone, 56, of Wolfe City, Texas. passed away Sunday, Aug. 2, 2019 in Hunt Regional Hospital of Greenville. He was born on March 21, 1963 in Wolfe City to Glendale Malone and Millie Isabel Malone.

Mr. Malone married Tonia Sue Brown on May 21, 1982 in Wolfe City. Mr. Malone was employed by HMI Utilities as a construction supervisor. He graduated from Wolfe City High School, was a member Excelsior Lodge 505 in Wolfe City and was a Past Master of the Lodge.

Funeral Services will be held on Thursday, Aug. 8 at 10:30 a.m. in the First Baptist Church in Wolfe City conducted by Bro. Tim Hearn. Visitation will be Wednesday evening from 6-8 p.m. at the R.W. Owens & Son Funeral Home Chapel. Burial will be in Mt. Carmel Cemetery Wolfe City with a Masonic Graveside service.